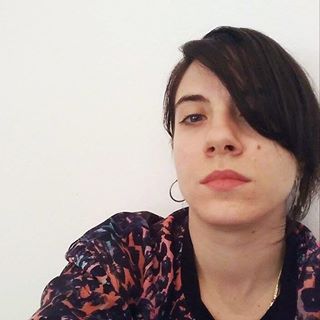 Eva Papamargariti grew up in Greece where she graduated from the Department of Architecture, University of Thessaly with a Diploma in Architecture (2012). She holds a Master Degree on Visual Communication Design from Royal College of Art, London. Her practice focuses on time-based media (video, gif animations) but also printed material and sculptural installations that explore the relationship between digital space and (im)material reality. She is interested in the creation of 2d/3d rendered spaces and scenarios which provoke narrations based on the obscure simultaneous situations happening in a quotidian frequency on the verge of digital and physical environments blurring the boundaries between these ‘ecosystems’. Her work delves into issues and themes related to simultaneity, the merging and dissolving of our surroundings with the virtual in addition to the constant diffusion of fabricated synthetic images that define and fragment our identity and everyday experience. Furthermore, processes that are established through online presence, as well as the traces that our operations inscribe to the objects and habitat where we find ourselves situated into, through our continuous interaction with devices and machinic artifacts.

Chapter 1: Into Libya by: Eva Papamargariti